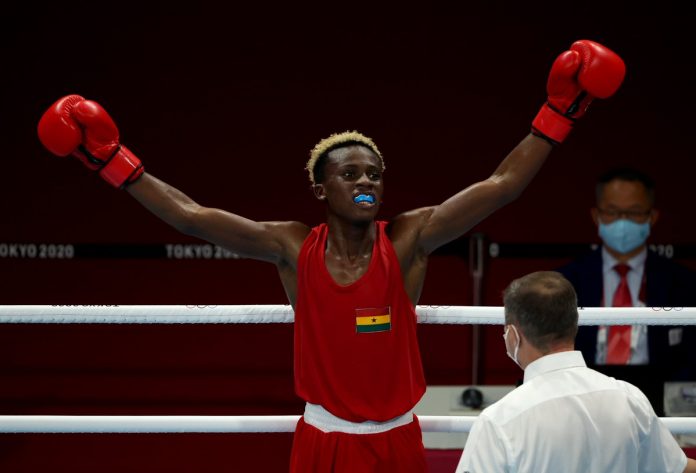 Samuel Takyi, the 20-year-old boxer representing Ghana at the 2020 Olympics still ongoing in Japan, Tokyo, has won Ghana’s first medal at the event.

In what would go down as a priceless moment, the talented boxing prodigy won his Olympic quarter-final to clinch a medal for the country.

Takyi triumphed over Colombia’s 32-year-old David Ceiber Avila, which got the judges to score the Ghanaian winner of two out of three rounds handing the 20-year-old victory over his opponent.

Takyi joins ranks of Ghanaian Olympic greats Clement Quartey, a light welterweight who won silver in Rome in 1960, Eddie Blay a bronze light-welterweight medallist from Tokyo 1964, and Prince Amartey who made history in Munch 1972.

Takyi has caused a sensation as “The Golden Ring Warrior” has brought home the first Olympic medal since the football team won bronze at Barcelona in 1992. Also, the first boxing medal since middleweight Prince Amartey, who took the bronze in Munch 1972

Some Facts About Takyi

1. Ghana’s first medal in almost 3 decades As it stands now, Takyi has won Ghana’s first Olympic medal in 29 years. The last time Ghana won a medal at the sporting event was in Barcelona 1992.

2. Fought and won over an opponent who was 12 years older and veteran. Olympian Samuel Takyi, who is only 20 years old, was pitched against 32-year-old experienced fighter, David Ceiber Avila from Colombia.

3. Chance to win Gold After securing the bronze medal with the quarter-final glory, Samuel Takyi is still in the running to win the ultimate medal – Gold – if he wins his next fight on Tuesday.

My mother abandoned us when I was in Secondary School —...

I have performed more miracles than Jesus Christ did – Angel...