Home GENERAL 13 dead, 11 injured in an accident on the Kumasi-Accra highway 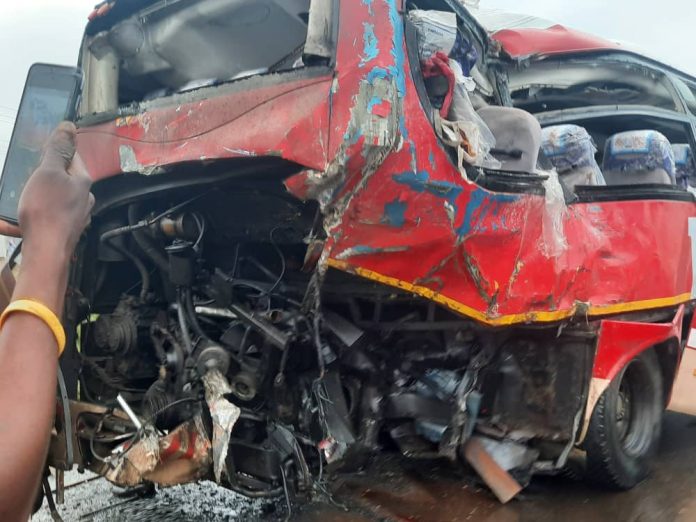 13 people are reported dead while 11 have been injured in an accident that occurred on the Kumasi-Accra road on Sunday October 3.

The accident which occurred at around 10:30 PM involved an Accra-Kumasi bound bus and a Cargo Truck at Konongo in the Ashanti Region.

“The passengers together with the driver and the mate, there were 26 persons on board.”

“There was a truck ahead of the bus and in an attempt to overtake, it crashed into the other at the front part and both vehicles fell into a ditch. 13 people died on the spot and about 11 others injured.”

Below is the Police situational report…

On reaching a section of the road at Ohene Nkwanta in a sharp curve on the Konongo- Kumasi highway, he was driving without due care and attention and as a result ran into the rear portion of Man diesel articulator truck No.GW 3569- 13 driven by lddrisu Seidu which was ahead of him on same direction and in the process veered off into the opposite lane and subsequently crashed into the offside portion of an oncoming OA Hyundai commercial bus No. GT 5597-19 driven by Kyere James with passengers on board from Accra towards WA.

Some of the passengers on board the bus sustained various degree of injuries and were rushed to Konongo- Odumasi government hospital for treatment whilst nine( 9 )males four (4) females died on the spot.

Body of deceased were photograph, removed and deposited at Steward hospital morgue, Yawkwei for identification and autopsy. Accident vehicles were removed from the scene of accident to safer place for testing. No.48757 G/Cpl Ofori Amanfo incharge case.

VIDEO: “IGP will be poisoned in December”- UK based Prophet Reveals

I Don’t Fear The IGP, I Only Respect Him Because Of His Position – Owusu Bempah

I’m not it in touch with Afriyie, it’s not necessary –...

Don’t give literal meaning to Akufo-Addo’s response to Torbgui Fiti —...

7 Die In Car Crash At Drobo

Missing Pregnant Woman: The Whole Story Was Faked… She Wasn’t Even...