Home GENERAL ‘I Didn’t Promise To Commence A Harbour Construction In Cape Coast’ –... 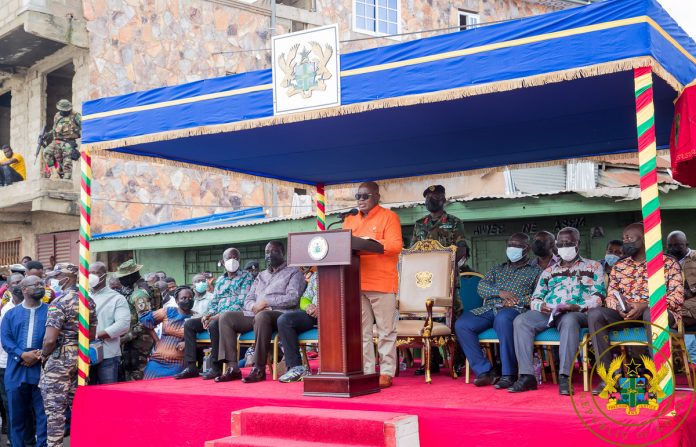 Residents of Cape Coast who have been waiting on the construction of a new harbour since the governing New Patriotic Party (NPP) won its re-election bid in 2020 may have their hopes dashed.

According to President Akufo-Addo, that infrastructure project was never a part of the list of commitments tabled before him for his second term.

“The commitment was never to a harbour; it was to a landing site,” he said on Cape Coast-based Eagle FM on Monday.

It was the first stop on his two-day tour of the Central Region as part of his annual working visits to the country’s 16 regions.

Justifying his statement, President Akufo-Addo referenced Page 88 of the NPP’s 2020 Manifesto, dubbed Leadership of Service: Protecting our Progress, Transforming Ghana for All.

Per the document, he outlined a few of the sites slated for the Central Region, which he said are at various stages of completion as far as Phase One is concerned.

This was in response to a question about plans for the project, which had been bandied about by the people of the region.

However, the President clarified that the party actually pledged to put up a landing site as captured in the 2020 manifesto and earmarked for execution in 2022.

However, a perusal of the policy 2020 manifesto uncovered a paragraph that may be the basis of the region’s aspiration over a harbour that they believe would have improved the fortunes of the town’s coastal communities.

Page 160 of the document highlights some infrastructure development to be expected when the NPP secures power in the general elections.

This portion touches on several initiatives, including the commencement of the construction of “a new harbour in Cape Coast, and a new airport in Cape Coast.”

During his address at the launch of the party’s manifesto in August 2020, Vice President Dr Mahamudu Bawumia also disclosed that “for the people of Cape Coast, I have good news for you. We are building a new harbour in Cape Coast and a new airport in Cape Coast.”

Meanwhile, on the idea of an airport in the region, President Akufo-Addo explained that consensus about the location among other studies is complete.

“The commitment to build the airport in Cape Coast, that one is 100% committed, work is ongoing it, and I think very soon, just as we have seen with Wa, Ho, Sunyani – its almost complete, Cape Coast will get its own airport,” he added.

President Akufo-Addo’s tour in the region will involve the commissioning and inspection of projects under Government’s 1-District-1-Factory initiative and the inspection of ongoing road projects.

Ready to marry but I need money – Fameye