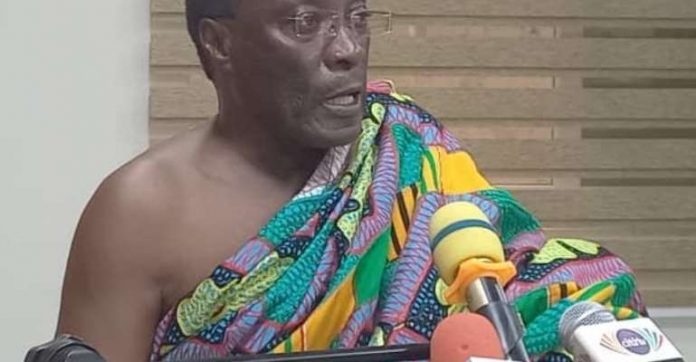 The President of the Volta Regional House of Chiefs, Togbega Tepre Hodo IV, has urged government to make the Ho Airport a West African Aviation Hub.

Togbega made the call in Ho, the Volta regional capital during the maiden Volta stakeholder’s conference organized by the Volta Caucus in Parliament.

The stakeholders conference aimed at dialoguing the developmental issues of the region, was on the theme, “Harnessing the Resources of the Volta Region.”

The conference which was attended by cross-section of stakeholders from the region discussed among other things, the infrastructural challenges in the region.

“I don’t see the Ho Airport as one, which is just to facilitate flights from Ho to Accra and Kumasi rather why don’t we start thinking about using the Ho Airport as a West Africa Hub,” Togbe Tepre Hodo stated.
Togbega Tepre Hodo who is Paramount Chief of the Anfoega Traditional Area was the special guest of honour at the meeting.

He charged the caucus to tender proposals for the aviation industry in the region, adding that focus must not only be on local commercial flights from Ho to Accra and Kumasi but advancing the facility into an Aviation Maintenance Training site for the West African Sub-region.

“You are the legislators you must make proposals for the Ho Airport to be used for such a hub, In addition, that airport can be turned into an Aircraft Maintenance Facility,” Togbega Tepre Hodo added.
Togbega Tepre Hodo also lamented the lack of collaboration between the chiefs and the Municipal and District Chief Executives (MMDCEs) in the region.

He also called for increased participation of the private sector and involvement of intellectuals in the development of the region.

“The quality of materials that we send to the District Assemblies must be paramount if we are to progress as a region,” Togbega Tepre Hodo emphasised.
The Ho Airport has remained dormant since the successful test flight exercise and commissioning in April this year.

He stated, “Let us look for people who can understand the issues of budget and expenditure so they can contribute and move the region forward.”
The Volta Caucus is a grouping of Members of Parliament (MPs) from the Volta region.

The maiden edition of the Volta Stakeholder’s Conference was under the auspices of the Volta MPs in Parliament.

It is aimed at dialoguing on pertinent developmental concerns in the region.

The 3-day event was under the leadership of Hon. Emmanuel Kwasi Bedzrah, the MP for Ho West Constituency and Chairman of the Volta Caucus in Parliament.

VIDEO: I really enjoy it when my man goes down on...

Ghana takes delivery of over 1.2 million Moderna vaccines from US...

3 Die in Fatal Head-on collision Accident On Accra To Kumasi...

Lockdown the whole of Ghana and not just Accra, Kumasi and...