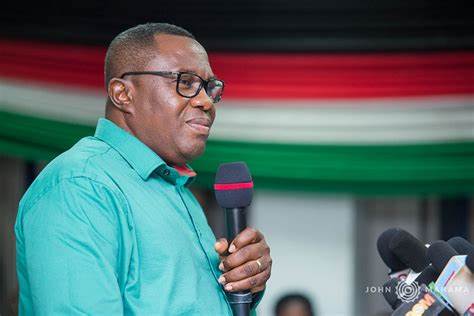 The National Chairman of the National Democratic Congress (NDC), Mr Samuel Ofosu-Ampofo, says the Ashanti Region has seen no development under the Akufo-Addo administration despite voting massively for him in the 2016 general elections.

He said the sad and painful aspect of the situation is that the President has also refused to complete various developmental projects that the Mahama administration started in the region.

Addressing NDC supporters at Bosomkyekye in the Mampong constituency on Saturday, during NDC Presidential Candidate John Mahama’s tour of the Ashanti Region, Mr Ofosu-Ampofo said instead of the President building development projects, he has specialised in re-naming projects that his government inherited from past administrations.

“Build your own projects and name them and stop re-naming the ones you didn’t build”, Mr Ofosu-Ampofo said.

The NDC’s National Chairman said his party has kept good faith with the Ashanti Region in terms of development projects, including the construction of the Kejetia market, various hospital projects, schools and the Barekese Water Expansion Projects, among others.

Mr Ofosu-Ampofo assured the people that Mr John Dramani Mahama will continue all abandoned projects in the Ashanti Region and will work hard to provide decent and sustainable jobs. He said Mr Mahama is also committed to protecting the thousands of jobs in the local automotive industry, including those in Suame Magazine, Abossey Okai, Kokompe and others.

Chairman Ofosu-Ampofo said unlike President Akufo-Addo, Mr Mahama is a trust-worthy leader who will not waste state resources.

“Mr Mahama will not waste public resources like we are seeing today where even a chair belonging to the President is having its own fully air-condition car following him everywhere. Mahama is a servant and he is going to serve to promote development for every Ghanaian”, he said.

Mr Ampofo therefore urged electorates to vote for Mr Mahama in the December 7, 2020 general elections to enable him create prosperity for all by providing jobs, implementing Free Primary Healthcare for all, Free Technical and Vocational Education and Training (Free T-VET) as well as state-sponsored National Apprenticeship Programme to equip the youth with employable skills.

One Year On, Ebony still reigns.

I have everything in this world except husband — Tracey Boakye

Mahama is not greedy, there’ll be apathy if he doesn’t lead...